A memorial set in stone is a permanent tribute to loved ones or events.  Memorial design considerations include meetings with the client.  These meetings give me an insight into the lives and history of the event to be immortalized. 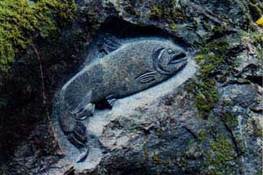 The Foundation approached the Sculpting Department of Capilano College in Vancouver BC. for the purpose of creating a memorial at the site of the crime. Bruce Watson, resident artist at the time, was       approached to head the project.

He formed a team of three artists and two assistants: 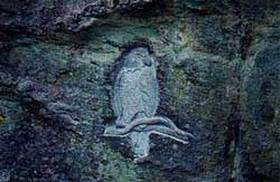 The layout addressed a number of issues directly related to the victim and the native site, which is considered sacred. According to local First Nations legend, the spirits of their ancestors travel at night from the Fraser river over a path they have used as fishermen for thousands of years. It is the same path on which Melanie was found. Native belief has it that these spirits are angered by violence thus the victim's soul needed protection from them. The Natives consider the Eagle as their guardian spirit. It was decided to depict the raptor to serve as Melanie's as well. 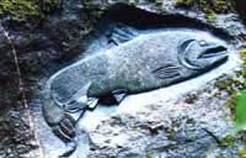 The depiction of the salmon pays tribute to the fish as a food source which has sustained this tribe for thousands of years and is the sole reason for the existence of this location. 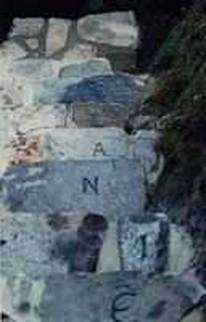 A staircase with seven steps was built, each step with a letter carved in to it, reading the name of the girl from the ground up. This structure leads to and away from the site. Visitors encounter this installation first. Noticing the letters is the first indication of the memorial. It represents Melanie's pathway to eternity and peace.